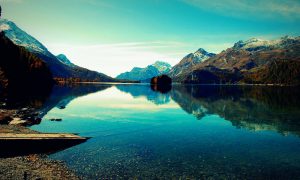 Earth’s natural resources are either nonrenewable, such as minerals, oil, gas, and coal, or renewable, such as water, timber, fisheries, and agricultural crops. The combination of growing populations and increasing levels of resource consumption is degrading and depleting the natural resource base. The world’s population stood at 850 million at the onset of the industrial age. The global population has grown to nearly seven times as large (6 billion), and the level of consumption of resources is far greater. This human pressure now exceeds the carrying capacity of many natural resources.

Nonrenewable resources, such as fossil fuels, are replaced over geologic time scales of tens of millions of years. Human societies will eventually use up all of the economically available stock of many nonrenewable resources, such as oil. Conservation entails actions to use these resources most efficiently and thereby extend their life as long as possible. By recycling aluminum, for example, the same piece of material is reused in a series of products, reducing the amount of aluminum ore that must be mined. Similarly, energy-efficient products help to conserve fossil fuels since the same energy services, such as lighting or transportation, can be attained with smaller amounts of fuel.

It may be expected that the biggest challenge of resource conservation would involve nonrenewable resources since renewable resources can replenish themselves after harvesting. In fact, the opposite is the case. Historically, when nonrenewable resources have been depleted, new technologies have been developed that effectively substitute for the depleted resources. Indeed, new technologies have often reduced pressure on these resources even before they are fully depleted. Fiber optics, for example, has substituted for copper in many electrical applications, and it is anticipated that renewable sources of energy, such as photovoltaic cells, wind power, and hydropower, will ultimately take the place of fossil fuels when stocks are depleted. Renewable resources, in contrast, can be seriously depleted if they are subjected to excessive harvest or otherwise degraded, and no substitutes are available for, say, clean water or food products such as fish or agricultural crops. Moreover, when the misuse of biological resources causes the complete extinction of a species or the loss of a particular habitat, there can be no substitute for that diversity of life.

“Conservation” is sometimes used synonymously with “protection.” More appropriately, however, it refers to the protection and sustainable use of resources. Critical elements of the effective conservation of natural resources include sustainable resource management, establishment of protected areas, and ex-situ (off-site) conservation